The dream that failed

A year after Fukushima, the future for nuclear power is not bright—for reasons of cost as much as safety 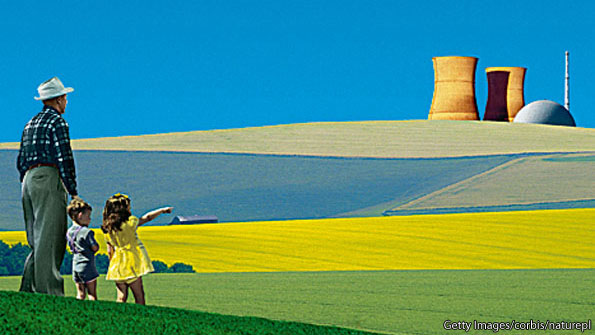 THE enormous power tucked away in the atomic nucleus, the chemist Frederick Soddy rhapsodised in 1908, could “transform a desert continent, thaw the frozen poles, and make the whole world one smiling Garden of Eden.” Militarily, that power has threatened the opposite, with its ability to make deserts out of gardens on an unparalleled scale. Idealists hoped that, in civil garb, it might redress the balance, providing a cheap, plentiful, reliable and safe source of electricity for centuries to come. But it has not. Nor does it soon seem likely to.

Looking at nuclear power 26 years ago, this newspaper observed that the way forward for a somewhat moribund nuclear industry was “to get plenty of nuclear plants built, and then to accumulate, year after year, a record of no deaths, no serious accidents—and no dispute that the result is cheaper energy.” It was a fair assessment; but our conclusion that the industry was “safe as a chocolate factory” proved something of a hostage to fortune. Less than a month later one of the reactors at the Chernobyl plant in Ukraine ran out of control and exploded, killing the workers there at the time and some of those sent in to clean up afterwards, spreading contamination far and wide, leaving a swathe of countryside uninhabitable and tens of thousands banished from their homes. The harm done by radiation remains unknown to this day; the stress and anguish of the displaced has been plain to see.

Then, 25 years later, when enough time had passed for some to be talking of a “nuclear renaissance”, it happened again (see article). The bureaucrats, politicians and industrialists of what has been called Japan’s “nuclear village” were not unaccountable apparatchiks in a decaying authoritarian state like those that bore the guilt of Chernobyl; they had responsibilities to voters, to shareholders, to society. And still they allowed their enthusiasm for nuclear power to shelter weak regulation, safety systems that failed to work and a culpable ignorance of the tectonic risks the reactors faced, all the while blithely promulgating a myth of nuclear safety.

Not all democracies do things so poorly. But nuclear power is about to become less and less a creature of democracies. The biggest investment in it on the horizon is in China—not because China is taking a great bet on nuclear, but because even a modest level of interest in such a huge economy is big by the standards of almost everyone else. China’s regulatory system is likely to be overhauled in response to Fukushima. Some of its new plants are of the most modern, and purportedly safest, design. But safety requires more than good engineering. It takes independent regulation, and a meticulous, self-critical safety culture that endlessly searches for risks it might have missed. These are not things that China (or Russia, which also plans to build a fair few plants) has yet shown it can provide.

In any country independent regulation is harder when the industry being regulated exists largely by government fiat. Yet, as our special report this week explains, without governments private companies would simply not choose to build nuclear-power plants. This is in part because of the risks they face from local opposition and changes in government policy (seeing Germany’s nuclear-power stations, which the government had until then seen as safe, shut down after Fukushima sent a chilling message to the industry). But it is mostly because reactors are very expensive indeed. Lower capital costs once claimed for modern post-Chernobyl designs have not materialised. The few new reactors being built in Europe are far over their already big budgets. And in America, home to the world’s largest nuclear fleet, shale gas has slashed the costs of one of the alternatives; new nuclear plants are likely only in still-regulated electricity markets such as those of the south-east.

A technology for a more expensive world

For nuclear to play a greater role, either it must get cheaper or other ways of generating electricity must get more expensive. In theory, the second option looks promising: the damage done to the environment by fossil fuels is currently not paid for. Putting a price on carbon emissions that recognises the risk to the climate would drive up fossil-fuel costs. We have long argued for introducing a carbon tax (and getting rid of energy subsidies). But in practice carbon prices are unlikely to justify nuclear. Britain’s proposed carbon floor price—the equivalent in 2020 of €30 ($42) a tonne in 2009 prices, roughly four times the current price in Europe’s carbon market—is designed to make nuclear investment enticing enough for a couple of new plants to be built. Even so, it appears that other inducements will be needed. There is little sign, as yet, that a price high enough to matter can be set and sustained anywhere.


Whether it comes to benefit from carbon pricing or not, nuclear power would be more competitive if it were cheaper. Yet despite generous government research-and-development programmes stretching back decades, this does not look likely. Innovation tends to thrive where many designs can compete against each other, where newcomers can get into the game easily, where regulation is light. Some renewable-energy technologies meet these criteria, and are getting cheaper as a result. But there is no obvious way for nuclear power to do so. Proponents say small, mass-produced reactors would avoid some of the problems of today’s behemoths. But for true innovation such reactors would need a large market in which to compete against each other. Such a market does not exist.

Nuclear innovation is still possible, but it will not happen apace: whales evolve slower than fruit flies. This does not mean nuclear power will suddenly go away. Reactors bought today may end up operating into the 22nd century, and decommissioning well-regulated reactors that have been paid for when they have years to run—as Germany did—makes little sense. Some countries with worries about the security of other energy supplies will keep building them, as may countries with an eye on either building, or having the wherewithal to build, nuclear weapons. And if the prices of fossil fuels rise and stay high, through scarcity or tax, nuclear may charm again. But the promise of a global transformation is gone.